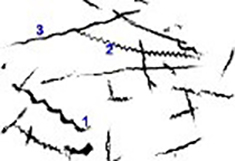 Microorganisms are capable of propulsion in the viscosity-dominated low Reynolds number regime. How does the hydrodynamics of microbial locomotion affect their biological processes and ecological roles? [CBET-CAREER-1252182]   Image caption: Helical trajectories of swimming Bacillus subtilis. 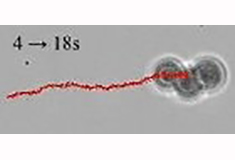 How can we design artificial microswimmers capable of low Reynolds number propulsion? Such microswimmers or microrobots may have applications in microfabrication, in situ sensing and diagnostics, drug delivery, and microsurgery. [CBET-1067798, CMMI-1435652]   Image caption: Achiral magnetically rotated microswimmer. 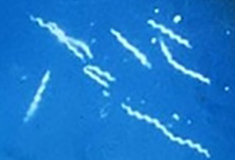 The basic principles of how microorganisms swim in Newtonian fluids are well understood. However, it is quite common that microorganisms must navigate complex media in their natural biological environments. What is different when swimmers are in non-Newtonian fluids and gels? [CBET-CAREER-1252182]   Image caption: Spirochetes burrow into tissue to infect it. (B. burgdorferi, CDC image) 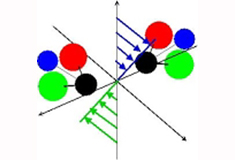 Chiral Particles and Microorganisms in Flows

Like left and right hands, chiral objects are not superimposable upon their mirror images. Chirality is ubiquitous in biology. Amino acids, the building blocks of proteins, are chiral, and hence all proteins are chiral. At a larger scale, bacteria often have chiral morphology, such as the helical flagella which propel many swimming microorganisms. What happens when chirality interacts with non-uniform flows? [CBET-0967510, CBET-1067798]    Image caption: Pair of chiral particles related by mirror symmetry. 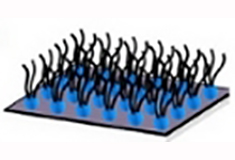 As a Ph.D. student, my graduate work was on the physics of strongly correlated electron systems, including high-temperature superconducting materials and mesoscopic superconductivity.