The wiggling trajectories of bacteria

The wobbling of cell bodies has often been observed and noted while flagellated bacteria swim.  A wobbling cell body corresponds to a helical swimming trajectory.  For a rigid flagellar bundle attached with a fixed orientation relative to the cell body, a helical trajectory is the natural result of off-axis thrust leading to simultaneous rotation and translation.  Collaborators Marcos and Roman Stocker (MIT) observed helical trajectories of B. subtilisbacteria, and we calculated the trajectories resulting from a full range of orientations of a single flagellar bundle. 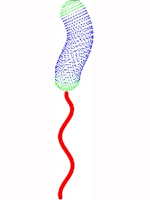 How much does cell-body shape contribute to propulsion?

Helicobacter pylori bacteria can infect the stomach, and have been implicated in stomach ulcers and cancer.  Although like many other bacteria they swim by rotating helical flagella, Helicobacter also have helical cell bodies, leading many to suggest that the counter-rotation of the cell body aids propulsion.  We calculate the effect of cell body shape on swimming velocities, and find that most of the effect on swimming is not due to cell-body thrust, but rather due to changes in drag.  Via a collaboration with Rama Bansil’s group at Boston University, we can compare our results to detailed measurements of swimming trajectories.  Since the helical cell body is likely one of the best shapes for additional propulsion, our results suggest that other cell-bodies likely do not have large contributions to thrust either. Image caption: How much thrust is produced by the helical cell body of H pylori, and what is its effect on swimming speeds?

Microscopic self-propelled organisms often approach other particles to capture food, mate, or find new environments. The viscous Stokes flow around these small organisms pushes away particles, severely hindering approach. We have investigated approach hydrodynamics for swimmers using both localized propulsion, such as a flagellar bundle, as well as distributed propulsion, such as metachronal ciliary waves. Approach efficiency can be measured by examining how far the swimmer must travel before getting close to the target.   Viscous effects severely hinder approach for localized propulsion when the target is smaller than the swimmer, consistent with observations that direct interception of food particles is seldom observed, but microorganisms can approach larger objects for fertilization, mating, or finding favorable habitats. On the other hand, some distributed propulsion methods can produce flow fields that aid the approach to small particles, similar to feeding currents. We also find that localized propulsion can be profitably compared to propulsion by a constant external force, which will allow us to perform macroscale experiments to investigate approach trajectories. Image caption: Approach towards target particle of (left) flagellar swimmer and (right) squirmer modeling ciliary swimmer.